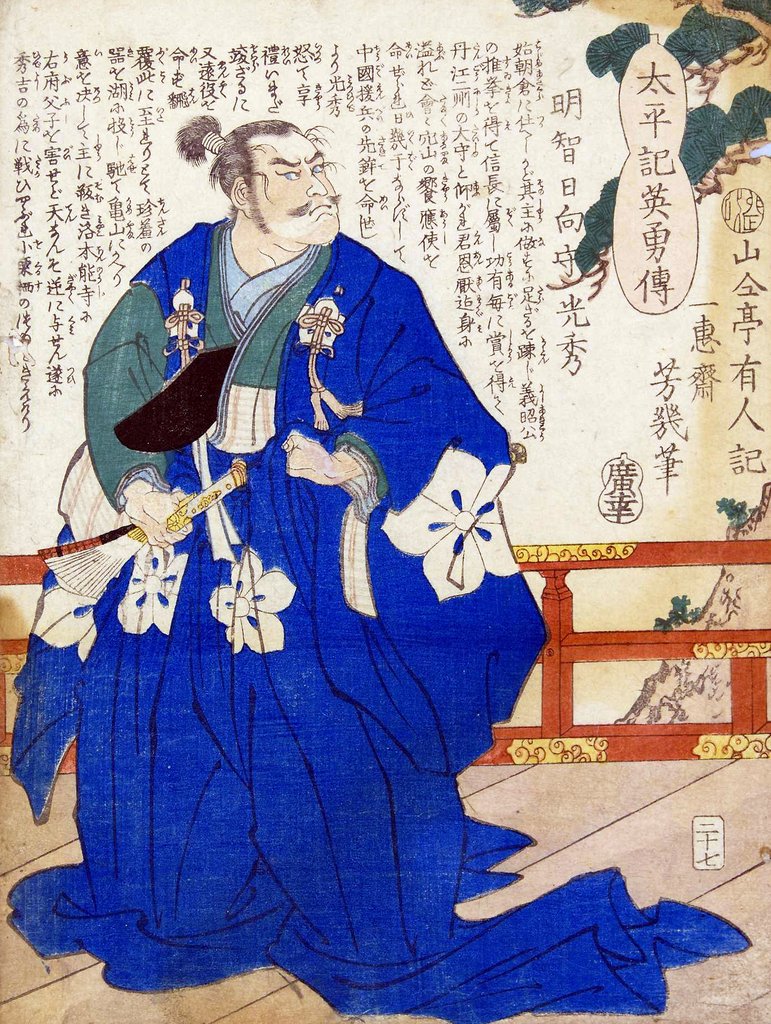 Among the famous samurai, Akechi Mitsuhide the warrior who defeated Oda Nobunaga, has a privileged place to finish one of the most important clans of the Sengoku period.

While the reasons for his betrayal of the shogun Oda Nobunaga, are still discussed among multiple specialists, Akechi Mitsuhide went down in history for such a daring campaign.

He is remembered for being a skilled samurai with the katana and being responsible for the Honnoji Incident on June 21st, 1582, where Oda Nobunga and his son Nobutada committed seppuku.

But we are not facing a villain, but before a warrior who was a faithful subject of Oda Nobunaga and different reasons led him to be remembered as a traitor.

AKECHI MITSUHIDE, THE WARRIOR WHO DEFEATED ODA NOBUNAGA AND HIS SON NOBUTADA

Akechi Mitsuhide was born in the Mino Province, current Gifu Prefecture, a descendant of the Toki clan, it is not known if he was born on July 2nd, 1528 or 1526.

His father was Akechi Mitsukuni, a warrior who served Asakura Ujikage; from a young age Mitsuhide followed in his father’s footsteps and became a skilled samurai with the katana and other weapons.

After the Province of Mino was attacked and conquered by the army of Oda Nobunaga, it is said that he met the shogun Oda, while he was a messenger of Yoshiaki.

And so, around 1566, when he was about 40 years old, he was a strong and cunning warrior with the katana, he joined the armies of Oda Nobunaga.

For being one of the commanders who gave the most victories to the Oda clan, in 1571 he was appointed daimyo of Sakamoto, in the Omi Province, which was valued at about 100,000 koku.

With the passage of time and for proving to be a faithful subject, Akechi became, along with Toyotomi Hideyoshi and Katsuie Shibata, one of the three generals of trust of the Shogun.

Who was known for being distrustful and very careful of whom he gave his trust and who allowed surrounding him.

Later, when Nobunaga declared war on the Mori clan, he ordered Mitsuhide to march along the north coast of the Chugoku arm and invade Tamba.

It was 1578 when he managed to subdue Hatano and Tango, after tough campaigns where he faced the Isshiki family and captured Takami Castle.

In order to pacify the altercations, he offered Hatanao Hideharu a peace agreement, but he had to appear before his lord Oda.

And so they did, but Oda Nobunaga decided not to respect the peace agreement offered by Akechi and ordered Hatano to be executed in 1579, which was seen as treason by the Hatano clan.

Those who did not think it was Oda’s betrayal, but directly from Akechi, and in retaliation, they kidnapped Mitsuhide’s old mother, tortured her and executed her.

When Mitsuhide realized, a great rage grew within him, which was fueled in the following years with the contempt and insults that Oda publicly uttered.

Finally, in 1582, still at war with the Mori clan, Oda once again ordered Mitsuhide to march west to support Hashiba Hideyoshi (Toyotomi) in his campaign.

However, Akechi Mitsuhide, who by then was about 52 years old, decided that it was time to take revenge, have the power and get out of the shadow of Oda.

After their relationship deteriorated more and more, Mitsuhide disobeyed Oda’s orders, and instead of marching westward, he marched towards Honnoji.

In the Temple of Honnoji were Oda Nobunaga and his son Oda Nobutada, who were surprised and subjected to katana tip by Akechi’s troops.

There, they were given the opportunity to commit seppuku or be killed, so they committed suicide themselves. Giving rise to the brief shogunate of Akechi Mitsuhide that originated with the Honnoji Incident on June 21st, 1582.

Unknown to Akechi, Hideyoshi’s guards intercepted a letter addressed to the Mori clan, announcing the death of Oda and the new power of Akechi.

Who did not have the incredible strategy that Hideyoshi would devise to return to avenge his lord Oda and take power away from the usurper Akechi.

Mitsuhide thought that neither Hideyoshi nor Tokugawa Leyasu nor Katsuie Shibata knew anything, and that Hideyoshi was still fighting the battle with the Mori.

However, in a true act of intelligence, the samurai Hideyoshi flooded Takamatsu Castle with the waters of the neighboring river and led them to sign a surrender agreement.

That way he returned before and with his strong army to Honnoji, less than a week after Oda’s death to surprise Akechi Mitsuhide.

It is when the battle of Yamazaki took place, and although the samurai troops of Mitsuhide and himself were excellent warriors with katanas and other samurai weapons, they were defeated.

After 14 days the battle of Yamazaki added to the victories of the one who would become the unifier of Japan: Toyotomi Hideyoshi.

It can be said that it was a great honor to be defeated only by the best, since Akechi is also remembered for a lifetime of victories and to be a great strategist and warrior with the katana.

The story of Akechi’s death is unclear, some say he managed to escape and changed his identity to become a Buddhist.

Others claim that while trying to escape, a peasant murdered him from a distance with a bamboo blowgun, in revenge for the death of Shogun Oda Nobunaga.

Although his end was not very happy or captivating, he cannot erase his entire victorious life at the service, first of the clan his father served and then, the Oda clan.

What man or samurai would not lose his temper after realizing of his mother’s unfortunate murder because of a broken promise?

Akechi Mitsuhide will continue to be remembered as one of the most important famous samurai in the history of Japan, first for his passion for katanas and combat.

And then for his betrayal of one of the most important Shoguns in samurai history: Oda Nobunaga.