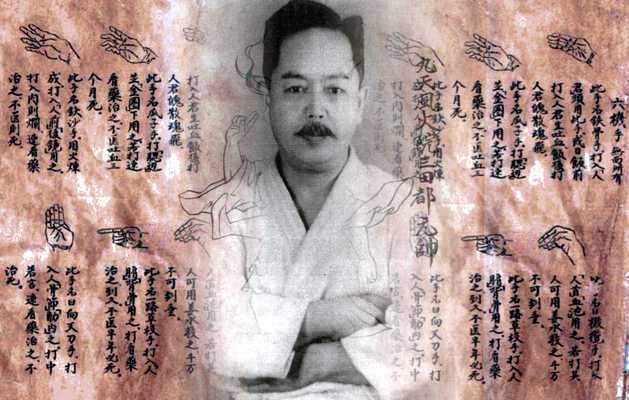 Kenwa Mabuni was the founder of one of the leading karate schools, Shito Ryu: one of the most practiced karate styles in the world.

Kenwa Mabuni’s story began on the ancient island of Okinawa. He was born in Shuri, the main settlement of the island, on November 14, 1889.

Like many founders of different martial arts such as Helio Gracie, Jigoro Kano and Gichin Funakoshi, Mabuni had a delicate state of health, which complicated his daily life at times. An important thing to keep in mind is that Kenwa Mabuni was a descendant of the ancient Onigusuki samurai, which indicates that Mabuni came from a wealthy family.

At the age of 10, Mabuni’s parents entrusted him with a former family teacher and servant named Matayoshi, who taught him basic karate movements.

Mabuni advanced considerably with Matayoshi, but at age 13 he was entrusted to Anko Itosu, where he continued his martial studies with much encouragement and perseverance. This is where you get much of your martial knowledge. In 1905 he entered the military school. He has also worked in the field of education and pedagogy, sometimes assuming the role of substitute teacher or substitute teacher of elementary schools in Nahia.

In 1912, he completed his military service and continued his studies at Okinawa Police College. Noteworthy is that he created a martial techniques research and practice group with Goju Ryu karate founder Chojun Miyagi. This group developed and tested various techniques of modern karate styles. Here, Mabuni’s interest in developing a different style of karate is being shaped. He made a number of exhibitions that are watched by a large number of people, including some members of the imperial delegation.

These events were held in 1918 on Okinawa Island. Mabuni’s desire to learn did not end and he began to study Bo-jutsu martial art through the great teachers Aragaki and Saeshi. This martial art highly influenced the techniques and methodologies of Shito Ryu style karate. Later, excellent news came to Mabuni because of his first son’s birth, named Kenei, in 1918. Mabuni usually practiced this martial art in his homeland as a police officer, which gave him a practical and real touch to his martial arts practice.

It was an excellent environment to put into practice the techniques learned, as well as to analyze the positive and negative factors of the movements, thus discarding any movement that is not effective in this field. After a while, he settled in Osaka and created his first school under the unique name of Mabuni Ryu (Mabuni style) in 1929, located in the police gym.

He also published several books of great interest under the titles of «Sepai no Kenkyu” and Kobo Jizai Goshin-jutsu Karate-do Kempo, thus dealing with philosophical points of martial arts. With the foundation of his school, Mabuni developed Shito Ryo karate. This karate has strong Bo-Jutsu influences and various Okinawa native martial arts, which he learned in his childhood. Mabuni stated that karate Shito Ryu has strong influences from Shuri-te, Naha-te and Kobudo. However, he also claimed that there is a slight influence from modern martial arts such as judo and aikido.

Mabuni also excelled at the police school as a self-defense teacher, so much so that he designed a defense system for women with other experts. One such expert was the former teacher and founder of Aikido.

We should highlight the difficulties that Mabuni encountered in expanding karate in Japan. Karate, being from Okinawa (a relatively new region within the Japanese empire) experienced constant discrimination, since it was not considered a Japanese practice.

Despite these obstacles, karate has expanded healthily and progressively into Japanese territory. All of this was achieved thanks to Mabuni’s perseverance. He also received help from different martial arts teachers, such as Jigoro Kano, who held government positions.

It is useful to highlight Mabuni’s commitment to the development of female martial arts and how he insisted on women’s participation in the different styles of karate, trying to introduce it in some women’s institutions. Mabuni officially founded karate Shito Ryu in 1931.

One of the hallmarks of his newly founded school is its training. As a police officer, he realized the importance of body fighting.