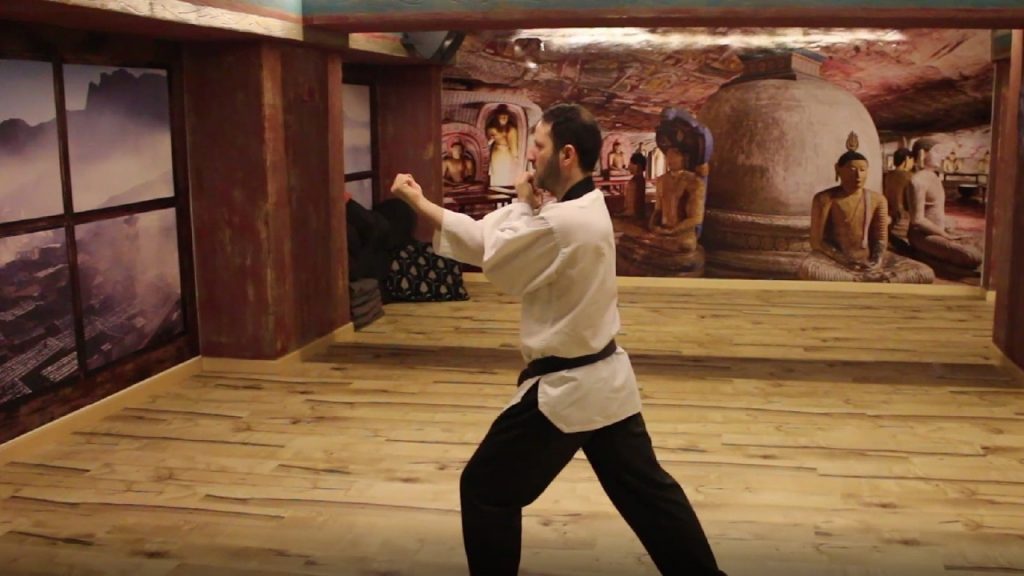 The 8th Poomsae TAEGUK PAL CHANG contains many basic movements and is the last TAEGUK pumse. From this pommsae we will pass to the superiors.

All the martial arts consist of basic and complex movements, actions that in their execution separately can be short but when joining several forms a great chain. The majority of martial arts, and especially Asian ones, have these movements to stimulate the learning of their practitioners. In karate, simple katas incorporate various techniques linked with others. Taekwondo, a Korean martial art, one of the most practiced in the world is no exception to this rule and it has poomsaes or pumses that are techniques of attack and chain defense to respond to hypothetical combat situations.

There are many poomsae, but there are two main categories; Taeguk poomsaes and superior poomsaes. We are going to teach you how to make the poomsae Taeguk Pal Chang.

This pumse or poomsae is characterized by its jumping techniques and double defenses.

The two shouts or kiap are made in each of the two jumps.

The 8th poomsae is the official one for the brown belt to black belt 1st dan exam, since it is the one that the court asks for along with another poomsae taeguk that they choose for the test.

What movements take place in the poomsae Sam Chang?

This is one of the last poomsae in the Taeguk series, the fundamental poomsaes. The Taeguk Pal Chang has 24 movements in 38 sequences. It stands out for its lateral defenses and its jumping techniques. Every poomsae begins with a respectful greeting to the audience and to martial art.

–Sequence 1 – 2 – 3 (Tuit kubi – Goduro montong maki): the left foot is forward and the right back, both are semi-flexed. The Fist of the right hand forward while the left fist rests close to the chest with the knuckles down. Then the position of the feet is changed to Ap kubi sogui and a Montong baro jirugui is executed (the right fist is advanced forward, the left leg is positioned in front and the left fist rests next to the belt).

After a double kick is executed, the left foot is thrown with a first kick with the right leg, and then the right leg is airborne. Subsequently, the position of Ap kubi sogui is performed and the montong maki is performed (the fist of the left arm points upwards in the form of a hook while the left fist rests near the belt with the knuckles pointing downwards).

Then proceed to do montong maki, throwing two fists in a row towards the front and ending with the left fist forward and the right resting close to the belt.

Then run montong dubong jirugui (sequence 3) leaving the right fist forward and the left fist resting near your left rib.

–Sequence 4 (Ap kubi sogui – Oe santul maki): turn backwards with the left foot using the right foot as the base when finishing turning. This position is called Oe santul maki. The left fist arm points diagonally towards the ground while the right one points upward in a hook shape.

–Sequence 5 (Ap kubi sogui – Dangkio tok jirugui): the direction of the body is changed by looking forward from the left, the waist will also move to the left. The right leg should be held in front while the hook-up right fist is held steady, the left fist is linear to the right shoulder. Both wrists are rotated. It is recommended to do this movement slowly.

–Sequence 6 (Ap kubi sogui – Oe santul maki): the left foot is moved to the right side, it is advanced and remains in the same position as in sequence 4 (Oe santul maki).

–Sequence 12 (Ap chagui): the direction is changed by moving the left foot to the left. A kick is made in that direction. Then you perform a montong baro jirugui directed to the left with the right arm striking forward.

–Sequence 13 (Ap kubi sogui – batagson montong maki): the left foot is moved back a little, being tiptoe. The right fist is next to the belt while the left arm strikes laterally.

–Sequence 15: (Ap chagui) a kick (Ap Chagui) directed towards the practitioner’s right is performed. To then perform a Montong baro jirugui.

–Sequence 16 (Bom sogui – Batangson montong maki): the right foot is moved back a little, being on the toe. The left fist is next to the belt while the right arm strikes laterally.

–Sequence 17 (Tuit kubi – Goduro are maki): take a half turn to the right moving the right foot then do goduro are maki with the right arm pointing downwards diagonally and the left arm is firm around the chest.

–Sequence 20 (Ap kubi sogui – palkup Dollyo chigui): here in this movement you hit with the right elbow, leaving it in front of your face while the left arm rests next to your belt.

–Sequence 21 (Ap kubi sogui – Dung chumok apechigui): a blow is made with the right arm upwards (the arm is in the shape of an inclined “L”) while the left arm is slightly above the belt in fist position. Then the montong bande jirugui movement is made giving a firm blow forward with the left arm, and the right one rests near the belt.

–Sequence 22 (Tuit kubi – Jansonnal montong bakat maki): change of direction (before the body pointed to the left now it changes to the right) in this movement the right arm is in front of the body with the palm of the hand extended while the left arm is fist-shaped close to the belt.

–Sequence 23 (Ap kubi sogui – palkup Dollyo chigui): the same movement as sequence 20 is performed, only in this case it is struck with the left elbow.