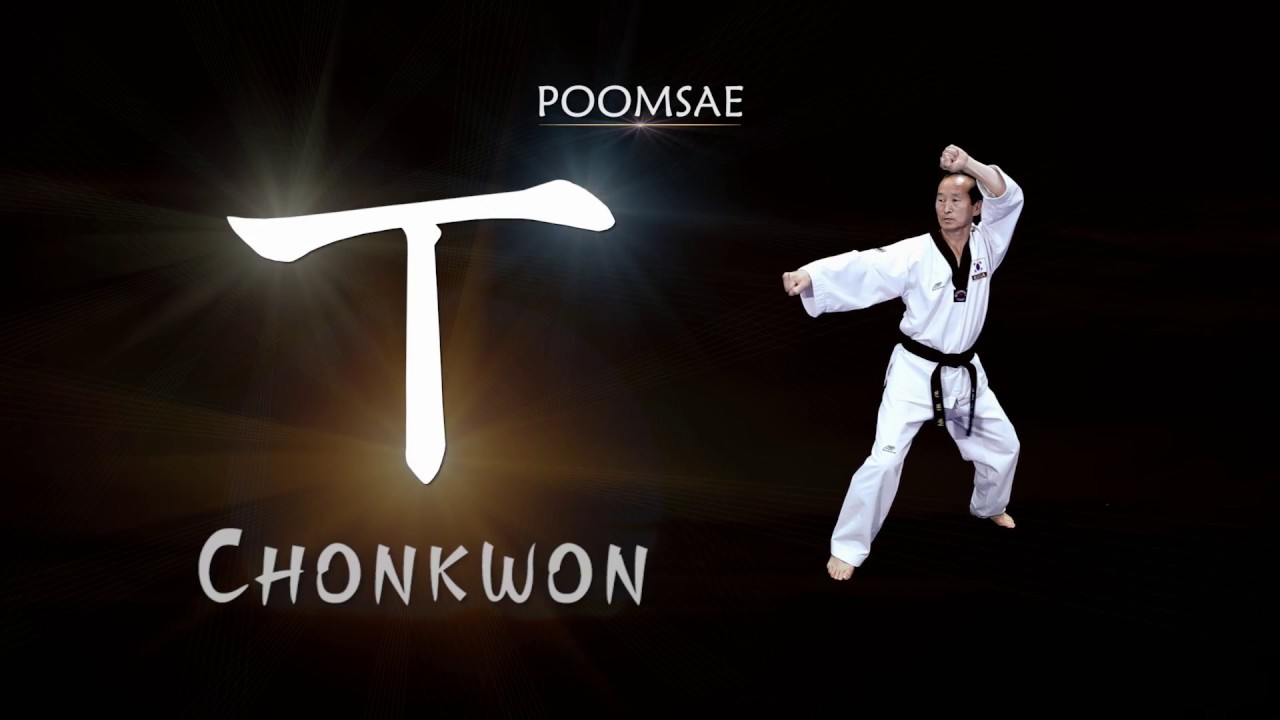 The POOMSAE CHONKWON or CHUNGKWON is the 7th (seventh) superior poomsae.

The POOMSAE CHONKWON or CHUNGKWON translates or describes the genesis or beginning of life, the origin of everything in the world and the cosmos but also deals with or refers to changes. It is one of the poomsae with the greatest spiritual sense in the world of taekwondo and martial arts.

It is one of the most complex poomsae in its realization.

What movements take place in the Poomsae Chonkwon?

This Poomsae or Pumse is one of the longest poomsae since it has 38 attacks and defense movements, in 26 sequences.

All poomsae begins with a greeting, this is a sign of respect for the adversary and martial art.

Sequence 1: (Moa Sogui – buttock Pyogui) This sequence begins with the position of feet together, the arms are brought up to chest height, then it is connected and continues with the sequence.

Sequence 2: (Bom Sogui – sosum jirugui) In this sequence, the arms are moved and widely stretched to the corresponding sides of each arm, with the palm pointing to the sides.

Sequence 3: (Orun Ap kubi – jansonnal bituro maki) in this sequence the left foot is moved backwards, then the two knees are flexed and a striking movement is made with both fists towards the front.

Sequence 5: (Wen ap kubi – Jansonnal bituro maki) the two feet of the person doing the poomsae do not move in this sequence.

Sequence 6: (Orun ap kubi – Montong jirugui) the right foot is positioned forward in conjunction with the left hand, it directs a fist forward while the right is pulled back in the form of a hook.

Sequence 7: (Orun ap kubi – Jansonnal bituri maki) this position is very similar to sequence 5, as the feet do not move and maintain their position.

Sequence 8: (Wen ap kubi – Are maki / KIAP) Here a side kick is performed with the left leg, after the kick, the left foot is positioned in front of the right.

Sequence 10: (orun tuit kubi – An palmok goduro montog maki) then move left foot and turn with the back to the front.

Sequence 11: (orun tuit kubi – montong Jiirugui) with the gaze and part of the neck positioned to your left, block blows with the turn of the left arm.

Sequence 12: (Wen tweet kubi – monton jirugui) the right foot is moved forward together with a block with the left arm.

Sequence 14: (Orun tuit kubi – Montong jirugui) This movement is the same as that of sequence 11, only this is done on the right side. You block the blows using the twist of the right arm. Your body is positioned on the right side without moving your legs.

Sequence 15: (Orun tuit kubi – Montong jirugui) The movement of sequence 12 is repeated, the left foot is advanced forward together with a block with the right arm

Sequence 17: (Wen tweet kubi – montong bande jirugui) the position of the feet is maintained to, later, perform a kick.

Sequence 18: (Orun ap kubi – Montong bande jirugui) an “Ap chagui” kick is made with the right foot to put it forward. Here the side posture facing forward is continued.

Sequence 19-20: (Wen ap kubi – Sonnal Are maki) the right foot is picked up a little and the forward foot is advanced with both feet.

Sequence 22: (Chunchum sogui – kumgang yop jirugui) here a 360 degree kick is performed, in this kicking action the hand (left) hits the foot (right) in the air.

Sequence 23: (Orun tuit kubi – Sonnal oe santul maki) in this movement the position of the feet is maintained (the left foot pointed very forward is moved very subtly) but the head and trunk are directed to the practitioner’s left side, in other words, the gaze is directed to the left.

Sequence 24: (Wen tuit kubi – Sonnal oe santul maki) keep your feet as in the last sequence. The only difference is that the practitioner’s gaze and trunk change direction. Now the gaze is directed to the opposite side, the right.

Sequence 25: (Orun bon sogui – Taesan milgui) In this sequence the right foot rotates to its left so that then the left foot is placed next to the right. Hands are brought together in front of the body stretching to the sides. Right foot moves slightly forward. Subsequently the right hand performs the aiming movement (batangson) down and the left up.

Sequence 26: (Wen (Uen) (Uen) bon sogui – Taesan milgui) the same position of the previous sequence is repeated only with one notable difference. The left foot is moved a little forward and then performed downward (batangson) and the right up.

We recommend stretching the body and muscles before and after practicing this poomsae to avoid muscle injuries that can cause discomfort. It is also useful to practice it in a wide space to avoid accidents with physical objects or collision between people, this can interrupt your martial practice of poomsae.

We have 9 top Poomsaes. These poomsaes are those required by the WT Taekwondo Federation for promotion to DAN degrees.